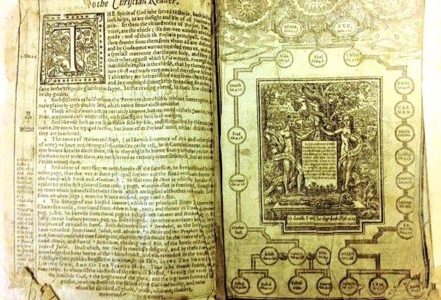 The King James Bible is also known as the ‘King James Version‘, as it is one of many attempts at translating, editing and interpreting selected religious texts. It was often the only book in a Christian household and would be passed down as a treasured family heirloom. Many English sayings were derived from it ~ ‘out of the mouth of babes’, ‘a law unto themselves’ and ‘how are the mighty fallen’, for example.

King James VI & I commissioned the work in 1604 and by 1611 forty-seven scholars had completed the task. They worked separately on their own pages and then convened to agree on the amalgamation. They used Greek, Hebrew and Latin documents, as well as previous English translations. Their knowledge of Hebrew was said to be inadequate and later revisions sought to address this.

With continual publication after 1611, printers’ errors and modifications abounded, particularly before Johnson’s Dictionary standardised the language in 1755. Cambridge University therefore produced a version in 1760 and Oxford University in 1769, both of which versions contained many thousands of corrections, plus additional interpretations of their own. In 1982 a ‘New King James Bible’ was published and there are even versions of this, such as a study version and a women’s version.