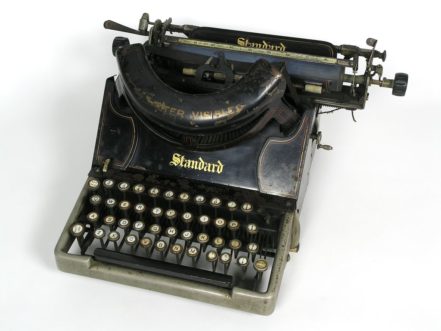 The first patent for a typewriter was granted in 1714 to Henry Mill (1683-1771) from southern England. It does not include a technical specification or drawing, but it states that he had perfected a machine for neatly setting down letters on paper just as if they had been printed. It goes on to suggest that this would be a great boon for keeping records, as any attempt at alteration would be quite obvious.

There were many attempts to manufacture a commercially viable typewriter, but it took until the 1870s for this to be achieved (in the USA). Among these attempts was that of Wolverhampton-born engineer Frederick Nesfield Cookson, whose 1860 index-type model is in the Science Museum. In 1885 he also designed a typewriter which could print right-to-left for languages such as Hebrew.

British typewriter manufacturers included George Salter & Co., who began production of the ‘Empire’ machine in 1892. Imperial and Brother were two others, with Brother claiming to have made the very last typewriter in the UK in 2012. Although demand dropped dramatically in the digital age, the typewriter remains an excellent network-free writing tool with many fans worldwide.