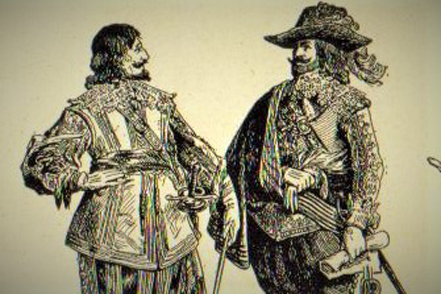 The language of the court is that which is spoken by the aristocracy. It is deemed to be the most prestigious and proper, hence the term ‘the Queen’s English’ (or ‘the King’s English’) to denote the best form of English. This was not really a concern until the advent of printing and the need to standardise spelling and grammar.

Latin was introduced by the Roman occupiers and the Catholic Church via the Bible, so it was the language of authority for many centuries, though it never displaced the English spoken by the majority of the population in their various dialects. Then, after the Norman Conquest of 1066, the Normandy dialect of French began to be spoken by aristocrats, though again, it did not replace English but eventually merged with it, giving us 29% of our language derived from French (alongside 29% from Latin, 6% from Greek, etc.).

In the sixteenth century it was decided that speaking the right sort of English was an important asset and the best exemplars were at the royal court, in the English translations of the Bible and, new at that time, dictionaries. Standard English thus began to emerge and the accent used in royal circles was the most desirable.