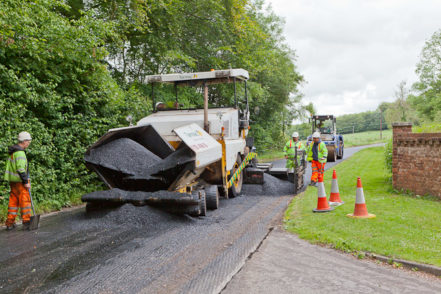 There were three people involved in the invention of tarmac (or tarmacadam), not counting John McAdam (1756-1836) from Ayrshire, who had previously come up with the ‘macadam’ road surfacing material. This was fine for horse-drawn carriages but not for cars, as the broken-up stones were loose and easily scattered.

The first person in the tarmac story is unknown, but it was his idea to cover up some spilled tar on a macadam road in Denbigh with slag. The second person was Edgar Purnell Hooley (1860-1942), from Glamorgan, who in 1901 saw how effective this covering had been in making that road durable enough for cars, albeit unintentionally. The next year he patented his own mixture, initially called ‘Tar Macadam’. This was smoothed over by a steam-roller.

The third man was Sir Alfred Hickman (1830-1910) from Staffordshire, who had sufficient finances and business acumen to buy Hooley’s company in 1905 and greatly expand its reach. Today, even surfaces which are not made of tarmac may be referred to as ‘the tarmac’, as it became so well-known.