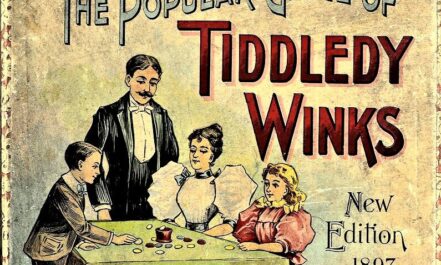 Hampshire-born John Assheton Fincher (1863-1900) was a London bank clerk who tried his hand at a few inventions, one of which was the board game ‘Tiddlywinks‘. The patent was registered in 1889, as was its original name, ‘Tiddledy-Winks’. It was taken up by the John Jaques & Son company and quickly became popular as a simple, light-hearted contest for all ages, the aim being to propel your winks (counters) into the central pot by pushing down on the wink edge with your squidger (big counter), thereby scoring tiddlies (points).

With jargon such as this (see the whole list provided by the English Tiddlywinks Association), it inevitably found its way into universities. In 1958 students at Cambridge even challenged HRH Prince Philip to a tiddlywinks match! He accepted but put The Goons in as his team. They lost. From 1961 onwards, the Prince presented the prize to the winners of the university Silver Wink tournament. That decade saw the highest number of universities participating in tiddlywinks, with the mainstay of Cambridge enduring to this day.

Aside from this, tiddlywinks is more usually known as a children’s game, sold either on its own or as part of a games compendium with a multi-purpose board, cup and counters.

(Image of a Tiddledy-Winks boxed game sold in the USA in 1897: Miami University Libraries at Flickr.com / Public domain)