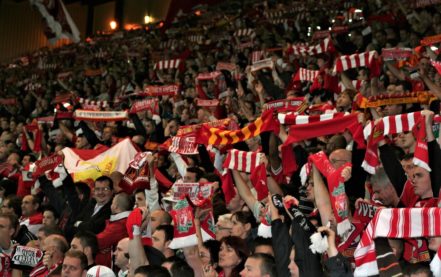 The most ardent football fans travel long distances to shout and cheer from the stands, but if the distance is very short, many more fans will be willing and able to attend. Passions run high at these footballing derbies and the atmosphere in a packed stadium will be noisy and competitive. Rivalry between fans of different clubs in the same town or district has a special intensity, so if the teams are in the same league or are drawn together in a cup match, there is added excitement.

Sometimes there is a particular historical background, such as in the derbies between West Ham and Millwall, where one side did not apparently support the other in a workers’ strike. The ‘Old Firm’ derby between Celtic and Rangers in Glasgow has a religious basis and the South Wales derby between Swansea and Cardiff was typified in 1988 by fifty Swansea fans chasing thirty Cardiff fans into the sea before police intervened.

Other notable derbies include:-