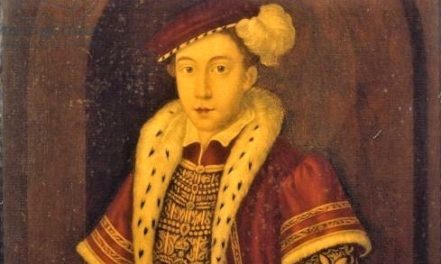 Like his second cousin, Lady Jane Grey, King Edward VI was born in 1537 and both their lives ended in their mid-teens, but while he died of an infection, her execution by Edward’s Catholic half-sister Mary was the direct result of his fervent desire to keep the country Protestant.

Edward was the long-awaited son of King Henry VIII and his third wife, Jane, who died after his birth. His safety was jealously guarded and he was the first royal heir to be immersed in the Protestantism of the new Church of England. His coronation in 1547 was noteworthy not only for its changes to suit a boy, e.g. extra cushions on the throne and lopping five hours off its length, but also for the Archbishop anointing him by the authority of God, not the Pope.

His uncle, Edward Seymour, ruled for him, taking the title ‘Lord Protector’, but he was corrupt and stole his money. Seymour was eventually executed on twenty-nine counts of treason. Mary also caused him problems by illegally continuing with the Catholic mass, but, as his heir, he was powerless to stop her; hence his last-gasp attempt to put the Protestant Lady Jane on the throne after his death.