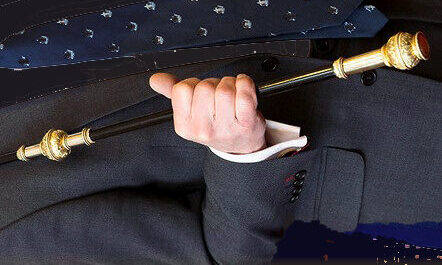 The Gentleman (or Lady) Usher of the Black Rod is a go-between for the House of Lords with the House of Commons in both ceremonial and administrative spheres. It is a Crown appointment which has its roots in the mid-1300s. The Black Rod is the ebony staff with gold embellishments and it is the Usher’s symbol of authority. However, ‘Black Rod’ is taken as shorthand for the Usher in person.

The role began as an organiser of meetings for the Order of the Garter and during the 16th century the Parliamentary duties were gradually added. In 1631, these officially became the main part of the job specification. This was two years after Lord James Maxwell, Black Rod at the time, was left fuming outside the locked double doors to the Commons whilst MPs held the Speaker in his seat until a certain document had been read out. This show of independence worked its way into the rituals that continue to this day.

Black Rod’s most public appearance is at the State Opening of Parliament, as shown in this video, which includes one of Labour MP Dennis Skinner’s quips ~ “Get your skates on – first race is half-past 2” ~ his custom during 1980-2019.

(Image of the lower part of the Black Road [cropped]: ukhouseoflords at Flickr.com / CC BY-NC-ND 2.0)